Looking at ancient Maya glyphs, we find some evidence, but it ain’t much.

Very few of the books and websites about the “Mayan Predictions of 2012”  admit this.  We archaeologists and decipherers have analyzed thousands of ancient inscriptions in Mayan.  Most of the carved stone monuments —the most prominent surviving glyph texts— as well as glyphs on painted vases, carry dates in the Maya calendar.  (Though most writers prefer to say “Mayan calendar”, this term is technically incorrect. See below.)

Glyphs painted on Kerr Vase 1398, beginning with a very ancient date. This famous vase portrays the mythical battle between God L (Tobacco) and the Lunar Rabbit allied with the Sun God. Though it contains nothing about the end of the world in 2012, it does give us precise dates of this ancient confrontation: tens of thousands of years ago, before the beginning of any known or posited Maya calendar cycle. 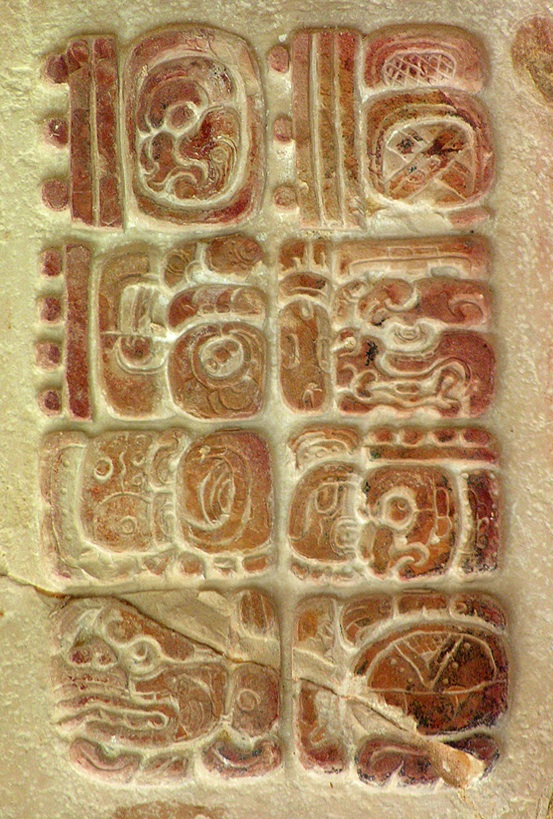 The Mayan calendar glyphs which start this text are precisely the same ancient date as the vase shown at left.

In fact, there are so many Calendar dates and time-intervals in their inscriptions, that some glyph scholars believed that the ancient Maya, uniquely, worshipped Time itself.  The fact that the calendar glyphs were the only glyphs to be deciphered, for most of the 20th century, didn’t help. Then, between 1960 and 1980, an avalanche of decipherments revealed that the ancient Maya were simply interested in stating precisely when things happened. The rest of their “mysterious” glyphs were concerned with royal life, conquests, dedications … the same things we carve in stone.

In all there are about fifteen stone inscriptions in ancient Mayan referring to the “Creation” date 13.0.0.0.0 in 3114 BC. Together these glyphs give us just a glimpse of the Maya Creation Myth, which must have been a much more complex story, as every creation myth is. One book, The Dresden Codex, actually refers to this date more times than all of the stone inscriptions combined. But the Codex says almost nothing about what happened on that date. Only two vases, out of thousands with glyphs, mention this “Creation” date, and they are two copies of the same incident.

The reason that we care about the last “Creation” is that it has the same Long Count date as December 21, 2012, as we shall see.  As for their so-called “predictions of 2012 end of the world”, we have one ancient text – only one.

Tortuguero Monument 6, closing passage. The last 6 glyphs on this long text are the only surviving ancient Maya mention of the date December 21, 2012. ( From the cover of Mark Van Stone's book, "2012: Science and Prophecy of the Ancient Maya". Photos by Elisabeth Wagner and Donald Hales, photo collage by Paul Johnson.)

These glyphs count ahead from the 7th century to our era, saying some 1330 years in their future, the date 13.0.0.0.0 (same as the “Creation date” back in 3114 BC), a rather minor deity named “9-Ok-Te” will perform a ceremony.  To be more precise, the text says “he will be displayed in the great impersonation” (according to Sven Gronemeyer and Barbara MacLeod, find their article on Wayeb).   This does not sound to me like a  “2012 end of the world”.

A pettifogging note about “Mayan” vs. “Maya”:     It may surprise you to learn that archaeologists, scholars and Maya elders have convened several times to decide precisely when to use these terms.

The word “Mayan” refers specifically to languages (“a word in ancient Mayan“, or “Yucatec and Quiché are the most common Mayan languages.”)

All other uses of the word “Maya” should lack the “n”, whether  as a noun (“the ancient Maya“), or as an adjective (“Maya tools”, “Maya monuments”, “Maya calendar”, even “Maya glyphs”).

Writers who continue to use terms like “Mayan end of the world”, “Mayan calendar”, or “the Mayans”, simply have not gotten the memo.  As my old friend Father Boyle, Prefect of the Vatican Library, used to say, “It is a sin, but not a mortal one.”