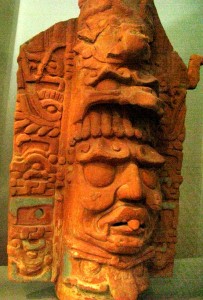 Visitors to Palenque can spend days bedazzled by the many ancient  buildings in various states of picturesque decay and reconstruction.  Set on a jungled hillside overlooking the plains of Chiapas and Tabasco to the north, the ruined city is sometimes dubbed “Athens of Mesoamerica” due to its wealth of sensuous relief sculpture. Like the Acropolis of Athens, the buildings of Palenque display mere fragments of what was once a vast gallery of polychrome sculptural art, shining from every wall, courtyard, mansard-roof, hallway, and roof-comb.
Unlike Athens, shining white in the rocky semiarid landscape, Palenque is crowded, surrounded, festooned, (one might even say oppressed) by the fecund jungle.  Toucans, monkeys, and innumerable loud insects gambol in the branches of the forest canopy; every tree is burdened with bromeliads, air ferns,

staghorn ferns, Spanish moss, strangler figs, huge termite metropoli, and aerial roots dangling down looking for more purchase, trying to wedge another slight advantage in the constant competition for the abundant resources.  Even in the “civilized” parts of town, near our hotel, the trees are stages, platforms for desperate competition, a tangle of roots and vines continually climbing on each others’ backs.
Only a tiny part of Palenque has been dug out from the grasping jungle. Ed Barnhardt and his team mapped the remains of about 1500 stone structures –temples, shrines, palaces, apartment blocks, performance platforms… even, in Residential Group B, a waterfall-view platform that could have –must have– been the site of moonrise-watching, spontaneous-poetry-composing parties.  Of these 1500, about 50 or 60 have been excavated.  The very first building one encounters upon entering the site is Temple 11 –still a towering, jungle-clad heap, flanking the main Plaza… Its next-door neighbors include the Palace, largest and most complex edifice of all, and the Temple of Inscriptions, containing the tomb of Pakal the Great.  This prominent pyramid was never unimportant, yet it remains unexcavated.   This is a reminder of just how much work archaeologists have yet to do… In Mike Coe’s phrase, “We have 1% penetration”.  (Also on this plaza stands the tomb of Pakal’s excavator, Alberto Ruz-Lhuiller, and a ceiba planted in memory of Linda Schele, in 1998.  It is growing fast, I hardly recognized it.  “See the tree, how big it’s grown…”)
The time-framework of any archaeological survey lie in its ceramics. Sherds of broken vases, plates and figurines litter every site, and any careful excavation includes a careful assessment of every scrap of pottery found at each stratum.  The changes in style, composition, and quality of the pottery are the most secure way to date the items associated with them.  (Archaeologists at each site name their strata differently, according to whim, so, for example, the Early Classic “Tzakol” style at Waxaktun correlates with the “Manik” style dug at nearby Tikal… It takes some time for the freshman archeologist to learn one’s way around the various chronologies.) 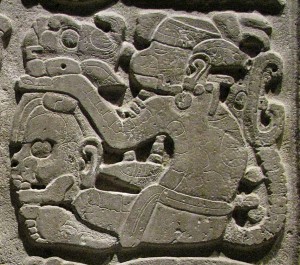 Within the grand stylistic chronologies, of course, there are local styles.  And of course, some cities had better ceramics than others.  (For a mesmerizing look into the rich and dazzling variety of Classic Maya painted pottery styles, see Justin Kerr’s invaluable Maya Vase photographic database at Mayavase.com.  You’ll eventually recognize the distinct painting “schools” of Nakbe [“Codex-Style”], “red-background”, “Ik’ site”, and Naranjo pottery, for example.)
What I find surprising is that Palenque ceramics are, for the most part, crap —  plain, unadorned, low-quality pottery, surface fragments often crumbling into sand in one’s hand if one picks it up.  It is as if Palencano artistic energy all went into their wall-paintings and relief sculpture… with one curious and glorious exception: their incensario stands. 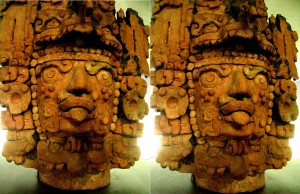 These ceramic objects, standing two to three feet high, are intricate, unique, and prodigious; over a hundred have been dug up so far, almost all on the Cross Group.  Many, for example, were systematically buried, every meter or so along every side of the nine-level Pyramid of the Cross.
They are made of the finest red clay, ornately sculpted and painted with Maya Blue (a unique and surprisingly-permanent pigment made from a special clay dyed with indigo); they each resemble a Northwest Coast totem pole: A cylinder comprising a stack of three faces adorned with lively figurines cavorting in the upper headdress, with low relief flanges on each side.  Atop the stack sits the incense-burner itself, usually unadorned and truncated-biconical.
The way these are displayed in the museums of Mexico City and the Site Museum at Palenque, in less-than-perfectly-clean glass cases that reflect *everything*, prevents decent photography of a whole stand… Hmph.  But I did get a few decent details…

I’ve included a couple stereo photographs of some of these little gems of sculptural detail.  If you have experienced the “Magic Eye” fad of recent date, you can look at these photos…. Cross your eyes to merge the two views, and if you can hold them and focus, the 3-Dimensional effect will provide you a nice Oh-Wow moment.  It takes a little practice, but well worth the effort!
Another sculptural masterpiece is the Jade Mask of Pakal.  It has been reconstructed twice, the newer 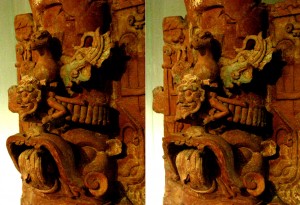 version based on careful archaeological evidence, and apparently more true to the original. (The wooden substrate had decayed in antiquity, and all the archaeologists found were the jade mosaic pieces, slid off the skull to one side.)  Unfortunately, all Pakal’s burial jewelry is on display in the Museo Nacional in Mexico City, and only copies appear in the Palenque Museum, but I was fortunate while in the MNAH to get some good pictures.
We were ably led around the site for three days by my old friends Alfonso Morales and Julia Miller (now operating a Merida tour agency called Catherwood Travels).   I worked on their “Proyecto Grupo de las Cruces” excavation in 1999, drawing artifacts like incensario stands and the reliefs from Temple XIX.  Working at a dig is one of the most memorable and affecting experiences of many of my colleagues’ lives.  As with platoon-bonding and other intense group experiences, the rewards far outweigh all the 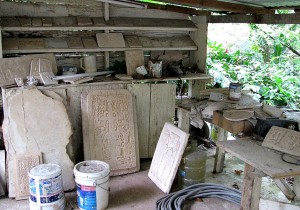 inconveniences (malaria, heat, humidity, mold, bugs, dengue fever, sweat, dirt, bad water, bad food, bad roads, political instability [and even worse, political bureaucracy!], vampire bats, … did I mention bugs?  The most aggressive and vicious ants, scorpions, mosquitoes, flies, centipedes, spiders, tarantulas, and earwigs you’ll ever have the displeasure to meet) … Those intrepid archaeologists just keep coming back.   As one might imagine, Alfonso and Julia had as many stories about the political underbelly of Mexican archeology as about the ancient history…
Alfonso and his siblings and cousins are also responsible for the superlative quality of the sculptural replicas one can purchase around Palenque.  They started the business around age 12 or 13, and developed techniques for transferring images from xeroxes onto stone, to guide their careful relief carving.  Alfonso related how the government tried to forbid the boys from making such accurate copies, because they were fooling the experts… One collector claimed to have the original Tablet of the Slaves, for example, causing a scandal that such a treasure had been stolen from the Palenque Museum without anyone knowing, until it was discovered that the original was still safe in Palenque….  Alfonso kindly pulled out a carving tool he’d made from a hacksaw and demonstrated his technique.  As with any expert craftsman, it astonishes to see how rapidly a form takes shape under skilled hands. 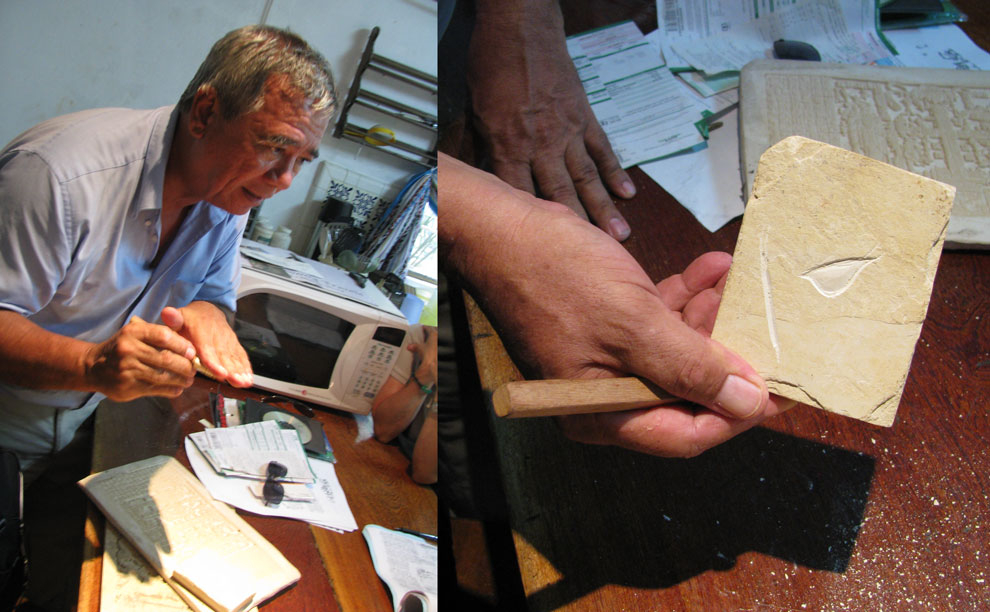 We stayed in the leafy district called La Canada, a block from the former home of Merle Greene Robertson (our hotel was on the corner of Calle Merle Greene).  I cannot close this note without note of her passing.  She died peacefully at home in San Francisco a couple months ago at 97 (or was it 98?), after a lifetime of accomplishment, touching the lives of almost every Maya archaeologist, and carefully recording-and-publishing every work of sculpture at Palenque discovered up to 1975.  One of her former students, Arlen Chase, has himself been head archaeologist at Caracol, Belize since 1985, and another funded the archaeological dig at Palenque at which I worked, and which found at Temple XIX the most important sculptures at Palenque in the second half of the 20th century.  He also found an early painted tomb in Temple XX, and claims to know where to find the tomb of the elusive Kan Bahlam, son of Pakal the Great.   (This quest needs another benefactor like Merle’s student!)  You can find an archive of her work, especially her thousands of rubbings of Maya reliefs, at the vast and excellent Mesoweb.com, the creation of the tireless and brilliant Joel Skidmore.  His generosity and industry are in keeping with Merle’s.
In any case, every archaeologist who passed through Palenque, and every student and every serious enthusiast (Merle did not discriminate, nor stand on ceremony), found welcome, good food, and an excellent library in Merle’s home.  She also convened the Mesas Redondas de Palenque, the biannual meetings of scholars and archaeologists that first broke the dam of Maya Glyph decipherment (starting 1973).  Read all about it in “Breaking the Maya Code”, or watch the Nightfire Film of the same name….
When Linda Schele died in 1998, I believe it was David Humiston Kelley who said, “She has left a big hole in the firmament.”  The same could be said for him, when he passed this spring, and it certainly applies to Merle.