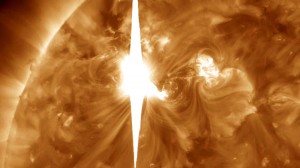 Today, my favorite NPR station’s network broadcast was interrupted. The local technicians had to improvise for a couple hours, because the satellite carrying their news feed was temporarily shut down by an electronic storm from the sun. This is the kind of event that we shall see more of over the next 12 months, as we ride out a Solar Maximum.

The present Solar Max made its grand entrance two nights ago, catching our attention with the eruption of a strong solar flare, sending a coronal mass ejection towards earth, “Hocking a lugie” at us, as CNN put it. On their website, CNN edited NASA’s press release thus:
“The equivalent of 10 billion tons of highly charged particles are hurtling at a rate of 3 million to 4 million miles an hour toward Earth.”

This is typical newsroom hyperbole. Once I lived in New Hampshire, and whenever it snowed, I got anxious calls from my California relatives, concerned to hear of “Blizzards dumping tons of snow on New England.” Yawn. We got snowplows. Now, my eastern relatives concernedly call when they learn of the latest 6.5-on-the-Richter-Scale earthquake that has “rattled” California.

To their credit, CNN featured a sober, trained meteorologist to give perspective to the event. While warning that solar flare activity will indeed affect satellite communications, particularly GPS, he reminded us that this is normal, not a catastrophe.

Solar activity has an eleven-year cycle: a rash of flares and solar storms for a few years, alternating with a period of relative quiet. The peak of this cycle is known as a Solar Maximum, during which the sun roils and seethes with tremendous energy, often sending out huge fiery arcs. These solar storms appear to us as dark “sunspots”, because they are relatively cool compared to the sun’s surface itself. We are entering the peak year of the cycle.

Now, the last couple Solar Maxima have been relatively mild. We have not had an intense storm for thirty-odd years. So, think back to the state of our long-distance communications in the early 1980’s. No cell phones, no GPS, and most of our long-distance calls went through cables, which are pretty robust, little-affected by solar flares. Nowadays, nearly ALL our phone calls, internet traffic, television, e-mail, stockbroker transactions, and burglar-alarm alerts go through satellites or cell-phone towers. All these media are sensitive, easily disrupted by coronal ejections of charged particles. Although no one can say for sure, many scientists expect this Solar Max could be a doozy, making up for the mild ones. Or maybe not.

The worst-case scenario is a series of rolling blackouts. The power grid can act like a miles-long antenna, and an electronic storm could pop some big fuses in the transmission stations, creating a domino-effect, cascading into massive blackouts that might last for a few hours (which is annoying) or a few days (which can be very expensive). (This happened here in Southern California last September 8th, on which, more later.) Perhaps equally problematic would be the loss of computer and telephone connections. How would your life change if someone took away your internet and phone for, say, three hours? How about three days? (For a preview, ask someone in Iraq or Libya.)

During our blackout here in San Diego County and Tijuana, my worst inconvenience was that gas stations had no power to pump gas, so I couldn’t drive over to see my girlfriend. And stores had to throw out massive amounts of produce and (un)frozen food. (Dumpster-divers had a field day. And, with no light pollution, I could see the glorious Milky Way from my parking lot, something impossible for the last half-century. And, unable to watch TV or use the internet, people came out of their homes, and actually talked to each other, sitting on stoops, and the like… It was great. I think it would be a healthy policy for us to schedule a widespread power-shutoff for an hour once a month or so, just to slow us down a little… Dream on!)

In any case be prepared. This kind of thing is going to happen more and more often, not less.
Now, I view the coming Solar Max disruptions as a nuisance, and wish to remind everyone that this is a regular event, whose effects are well known. We don’t really suffer much down here on the Earth’s surface because we’re protected by the planet’s magnetic field, which directs the charged particles toward the poles, producing the Northern Lights. And scientists don’t expect even a strong Solar Max to be particularly dangerous. Even a tremendous solar flare, ten times as big as we have ever seen, will not have the power to “blow away” this protective shield. It would distort it, and maybe kill a few satellites whose electronics are not properly shielded. But the worst we ought to expect is a long communications and travel blackout. As bad as that could be —and, it could be pretty bad for some—      It ain’t the end of the world. This is not the collapse of civilization that overwhelmed the Maya, and the Olmec before them. Not quite.

Sadly, most of the coming disruptions are preventable. Hospitals already invest in backup power systems, stocking fuel and generators to carry them through a blackout. Some entrepreneurs are already producing small, inexpensive generators for stores and gas stations. Let’s hope SOME of our suppliers are investing therein! (Computer programmers tell me that much of the expected Y2K “crash” was actually *prevented* by feverish activity of a band of noble geeks, staying up late rewriting code so computer systems would NOT crash. Thank you!) Nearly every problem we shall encounter due to solar storms will in some way be due to people neglecting to develop backups, or building robust shielding and delivery systems for power and data.

In any event, if a cascading-blackout, communications-satellite disruption, or other techno-failure results from this year’s Solar Maximum, it won’t be because the Maya foretold it. It is mainly the fault of our short-sightedness, putting all our eggs in one basket; of trusting a fragile technology.

Which, on a wider scale, is what caused the Maya Collapse. And the Fall of Rome.