Teotihuacan is pretty convenient to Mexico City. A short bus-ride from the Bus terminal Norte, for 36 Pesos, and the ticket seller gave me my first lesson (on this trip) in caveat emptor: “The bus leaves in three minutes,” he informed us, “Do you have 8 pesos?” I had given him a 200-peso note, and fished out the requisite change. He gave us our three tickets and we hurried away…. You guessed it. He did not readily proffer our 100-peso-note change. The bus was pulling out of its parking space by the time we did the arithmetic, and realized we had been *allowed* to overpay. (Later that day, we reported him, but we were unable to return the following day and confront him. His colleague was very apologetic …. and unable to pay us back.)

No shade, bring plenty of water. Teotihuacan, like every major archeological attraction in the country, cost us each 51 pesos. Couldn’t find a decent map of the site to guide us around, though there were maps posted here and there. I shot a photo and consulted it from time to time. Most of the visitor-friendly portion stretches along the Avenida de los Muertos, the broad, (nearly) north-south boulevard that forms the axis of the ancient mertropolis. It’s not exactly a highway, interrupted by stairways and sunken courts… There are no ballcourts in Teo, but the Avenida, lined with steps like bleachers, would have served well. Imagine huge, sacred Stickball tournaments held in Times Square…. Or down Colorado Blvd in Pasadena, instead of the Rose Parade….

Evidence of the ancient city’s enormous population, (variously estimated from 150,000 – 400,000, during its apogee in the 500’s AD): Even today, with millions of visitors annually, the ground is littered with ancient trash. Potsherds abound, red, buff, or black, even right on the Avenida. Here and there, especially after a rain, the occasional chip of obsidian glitters in the harsh sunlight. One does not pick up souvenirs at archeological sites –it’s unethical and illegal– but I did shoot a few pictures of some of the richer surface scatters of s herds.

We met some schoolboys who showed us, not just sherds, but a piece of pottery painted with post-fire stucco they had found. Teo is a rich site still… Will reward anyone allowed to stick a shovel in the ground. 95% of the city still sleeps beneath the sod. A few of the mounds have been penetrated, and several painted apartment-complexes even lie outside the fence surrounding the site. Why is there not an army of archaeologists burrowing and exposing its treasures? Partly lack of funding, mainly infighting and highly restrictive obstacles to anyone’s receiving permission to dig. Anyone lucky enough to dig here will find career-changing treasures, and the powers-that-be are not generous in granting such opportunities. Stay tuned, and visit often.

Teo died violently –a layer of ash overlays the final layers of occupational debris– around 650 AD. Some experts date its Fall as early as 600 or as late as 750, but I note that the Late Classic Florescence all over Mesoamerica seems to have really revved up in the mid-7th century: Cities like Tikal, Monte Alban, and Cholula enjoyed a huge building boom in the Late Classic (650-850); I attribute this to sudden freedom from onerous Teo-taxation. Most of the Classic ruins one visits show very little Early Classic or Preclassic architecture at all. Late Classic structures cover them all, just as Rome’s Early Christian, Medieval, and Renaissance churches all hide behind Baroque facades.

As we climbed the Pyramids of the Feathered Serpent (actually they don’t let you near it; we climbed the *adosada*, or porch), of the Sun (about 260 steps to the top), and of the Moon (they let you up half way), we scanned the site to see which mounds had been excavated, as we knew that that was where to see painted walls. By the time we finally learned that the mural sites were outside the gates, it was pushing four pm, and they closed at five. After much searching and asking –a pleasant walk through semi-rural avenues and alleyways– we found Tetitla, a large

complex (about 40 rooms?) with the remains of beautiful frescoes on many walls. Preservation exacted a price however: Only the portion of the walls which had lain buried for the last millennium, that is, the lower two to four feet, are still adorned… Often all we see are the feet of the sacred participants, or the lower framing band. 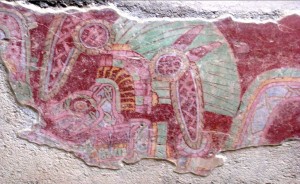 hundreds of fragments of their murals. He tells me they even contain a few glyphs. Sadly (for me), these are all packed away in the storeroom. But what is on display enthralls.

Now, the return journey provided some REAL adventure. About ten minutes out of Teo, the bus pulls over, some armed, brown-shirted special police clamber aboard, look over the passengers… point at me, and beckon. I rise slowly. I am NOT liking being singled out in this manner. My companions sit quietly, trying to be as unobtrusive, as *invisible*, as the rest of the passengers. They take me outside the bus, pat me down perfunctorily, and motion that I remain outside. Inside the bus they’re prodding and searching people’s handbags.… Eventually one of the guards and I establish enough of a connection to overcome the language *tope*. They’re looking for guns. My new friend tells me that the newest method to smuggle them is in ladies’ handbags, but all Americans are suspect. After ten endless minutes –or was it an hour?–, they let me back on, and we continue home.