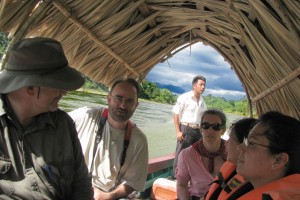 A four- to five-hour trek by road and a one-hour speedboat ride down the broad Usumacinta (which forms here the border between Mexico and Guatemala) brings the intrepid traveler to the riverbank-city-ruin of Yaxchilan, strategically located on a forested oxbow-peninsula, its main plaza winding along a plateau a hundred feet above the river.  Along this meandering sacred space its kings erected several dozen small palace-temples.  Kind of like the Washington Mall, I reckon.  Maya ceremonial structures like this always had lintels over the doorways, usually made of hard sapodilla wood, which resists rot and decay for centuries.  Eventually nature has her way, and nearly all these lintels rot away, letting a bit of the wall above them collapse.  Only a few such lintels survive, usually on high temples, above the tree line at Tikal and a couple other places where the wood was allowed to dry out. 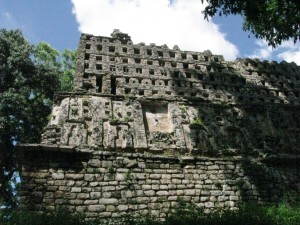 But at Yaxchilan and nearby Bonampak, the architects utilized a fine, tough limestone for their lintels, and Yaxchilan has yielded to archeologists (and ruin-raiders) about sixty of them, beautifully carved in relief.  Unlike the more-public stelae, which stand out in the plaza for all to see, lintels are much more private.  Only two or three people at a time can stand in their doorways and admire them. The carvings announce political-religious propaganda just like their more public brethren, but the messages

are more personal, meant for an elite audience.
Only a few of her lintels remain in place; most have been taken indoors for safekeeping.  Those at Bonampak still retain their original color.
But the city, sprawling along the riverbank-ridge and climbing up the hill, broods silently among the riotous jungle, in all my years of my element collecting hobby I’ve never seen stones which are kept free of invading roots and insect-hives only by an assiduous army of cleaners.  As in most Maya ruins, 95% of the buildings still sleep under the soil, indistinguishable from other hills or mountains except for their sharp slopes and regular arrangement.  The exposed five percent are awesome, hulking and evocative, made all the more so when one notices their numerous sleeping siblings.
Entering the site, the first building one encounters is the “Labyrinth”, a rambling palace that one enters from the rear.  Although living in a stone palace

must have offered some advantages over the typical thatch-and-stick houses that have offered shelter here for millennia… But I don’t know what these are.  In an environment that reminds me of summers in Texas and Alabama, perhaps the thick stone walls retained the cool of winter, like caves worldwide.  Also a stone palace, when attacked, resists both battering rams and fire.  But the dark, narrow, corbeled passages of the Labyrinth, weeping with percolating moisture, are hardly an inviting home.  The air is thick, hot, still, stifling.  There seems to be no outlet for smoky lamps; the rooms could only rarely have been cheerily lit; after a few minutes the smoke from a Maya chandelier would have filled the passages.  There must have been some religious perquisite, some aspect of Underworld-imitation, whose mystery, dark forces lurking, offset all the inconvenience.  I have little doubt that the rulers spent most of their nights on gazebo-like sleeping-porches up top, where they would catch the breezes.  I have no doubt that ancient Maya weavers were as skillful as their Egyptian counterparts; surely the ruling class had mosquito netting. Maybe that was one use for the ubiquitous “curtain holes” we see all over Palenque.
Today, the Labyrinth supports a variety of creepy wildlife, mainly bats and spiders.  The arachnid

pictured here had a legspan about the size of my open hand; I speculated at the function of its specialized legs: claws like a scorpion, okay, but that third pair of legs, why twice as long as the others?  The charming little bats hanging from the vaults objected to our flashlights, glaring balefully at us while we tried to get a good picture before they grumpily retreated back into the darkness. Surprisingly agile fliers.  Some seemed to revel in the knee-jerk terror they inspired as they dive-bombed us, swooping back and forth down the hallways.  The Labyrinth is well-named; its hallways unpredictably tunnel to and fro through the structure, here and there opening into a room with a stone sleeping-bench, climbing up a few steps and then turning abruptly again…

We emerged into the Northwestern Plaza, the moss-clad stone walls of several rambling buildings surrounding a ceremonial (or perhaps merely amiable) open space.  The archaeologists left a few towering trees standing among them, shading the area with high canopy.  Some of these are sequoia-like giants, vine-festooned trunks disappearing into the canopy, impossible to do justice to in a photograph.
The best sculptural monuments of Yaxchilan are now mostly protected, either under roofs, or safely stored in museums –I saw about a dozen in Mexico City–, while many eroded altars and other sculptures are moldering peacefully away, covered with leaves and moss. 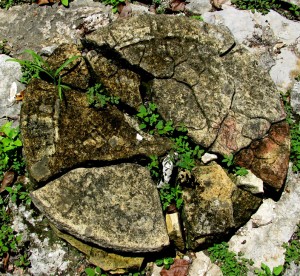 One of the best features of the ruin is due to its comparative inacessibility: besides our group we saw only about ten other tourists the whole day.  Not nearly enough customers to support the trinket-sellers who infest places like Chichen and Palenque.  Thanks be to Chaak and K’awiil.  Only the sounds of our hushed “Oh, wow”s, the keening cicadas, hooting monkeys, and a host of jungle birdcalls accompanied our tour.
Since I last visited Yaxchilan a k’atun ago, archaeologists have erected a dozen or so stelae, protected from weather under palapas… which also block the raking sunlight which makes for great photographs.  As a glypher, I beeline for these monuments and shoot them from afar and close 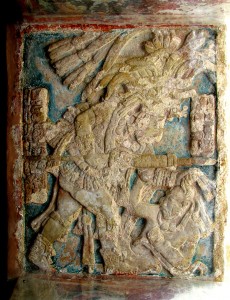 up, in detail and in stereo, in order to capture as much of their essence as possible.  In particular, two hieroglyphic texts caught my attention.  One is a taller-than-man-sized speleothem (a stalactite I believe) carved like a stela, from which a good portion has unfortunately spalled off.  This stands before Structure 33, standing on a hill far above the plaza, accessible by an arduous climb up a long staircase.  The view from up here must have been great when the city was in its prime and the trees had all be cut.
The other inscription also adorns Str. 33: a series of low, wide carvings, called a Hieroglyphic Stairway, depicting ballgames.  In each, a huge ball bounces down steps toward a ruler in ballgame gear, ready to return the volley.  Some of the balls in Ballgame iconography are marked as if to tell us what they contain; here, it is a trussed captive.  One of these scenes I feature in my book “2012: Science and Prophecy of the Ancient Maya”, because the text has a very unusual date.  This date (actually a special kind of time-interval, called a “Distance Number”) comprises 13 digits.  This indicates the event needed placement very specifically in a very large time-span; I liken it to a date like “21st June, 2011 AD, Holocene epoch, …”  A normal (and standard) Maya Long Count date needs only five digits, and spans a 5000-year interval. The extra digits expand the scope of this time-location by a factor of 20-to the-eighth-power, or 25,600,000,000, so we are talking on the order of 128,000,000,000,000 years, considerably longer than since the Big Bang…
Enough for now. Every trip to the jungle should include a lost city or two, without commercial interruption!