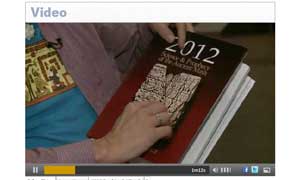 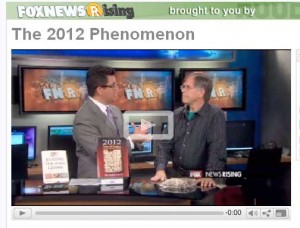 KESQ-TV Palm Springs, CA,  “Doomsday 2011”,   News Channel 3’s Philippe Djegal looks at a day many scholars believed would mark the end of the world. (Transcript of the Interview) 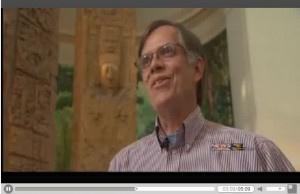 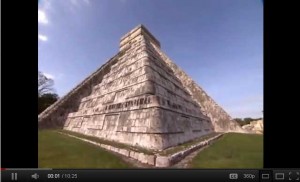 Mark appears in this segment as the “hero” –a genuine expert, as opposed to the wackos P&T mercilessly skewer in the rest of the show– from minutes 3:52 to 4:32, a total of 40 seconds. He escapes with only slight hazing from Penn. He also has a cameo at the very end of the show, if you can brave the foul language to find it!

John Gambling interviewed Mark Van Stone live on WOR-AM radio in New York City, in honor of the Winter Solstice December 22. In ten minutes, we covered many of the important issues on the Maya 2012.

Interview with Mark Van Stone on “These Days” on KPBS San Diego
Transcript What Did Mayans Think Would Happen in 2012? International WAVE Magazine Mayan Prophecy and misunderstanding about the End of the World By MALIK FAISAL MOONZAJER, from Kabul, AFGHANISTAN

“Let me affirm that the year 2012 does hold particular significance in Mayan scholarship. Those of us who study the ancient and modern Maya (anthropologists, archaeologists, art historians, linguists, historians, amateurs, curators, collectors) have been anticipating the end of the Maya “Great Cycle” for some time – as well as arguing just what that “end” denotes. We write it 13.0.0.0.0 4 Ajaw 3 K’ank’in. We have known for half a century that this date (probably) correlates to December 21 (or December 23) in the year 2012 in the Gregorian calendar” (“2012: Science & Prophecy of the Ancient Maya”)

So what if the Maya calendar says the world will end on Friday? Do as the good book (the other good book, “The Hitchhiker’s Guide to the Galaxy,” in which aliens destroy the Earth) says: Don’t panic.Purchase instead! Buy the “End of the World package” from the Keating Hotel in downtown San Diego for $666 and “train to outrun zombies with a fitness boot camp.” Or lurch over to Side Bar’s “The Apocalypse Party” a few blocks away and buy discounted bottle service gift certificates, good through 2013.  read more

My friends are madly probing, calculating, and discovering more Maya “magic numerical factors” in these scribal tables. Here’s an excerpt from the article:

For people hunkering down in anticipation of Dec. 21, 2012, the find also sounds the latest in a series of all-clears – indications that Mayan scholars say have been present all along to debunk Dec. 21, 2012 as a cataclysmic moment. One array of Xultún hieroglyphs and numbers refers to 17 baktun – 400-year time spans on the Mayan long-lob calendar, known as the long count. That means the scribes were thinking in terms of a 7,000-year time span. Although Dec. 21, 2012, represents the end of a 13th baktun, the Maya clearly didn’t see that as the end of time, the researchers say – merely the end of one cycle and the beginning of another. Saturno likens it to an automobile odometer rolling over from 120,000 miles to 130,000 miles.

For Mayan scholar Mark Van Stone, the find underscores the intellectual sophistication of the Maya’s culture. They carved out a civilization in a jungle – which required “remarkable persistence” and (at least initially) a sensitivity to their environment.

Like the Chinese and Egyptians, the Maya used large public displays of writing as a symbol of power. And the culture had a system of numbers, including the use of 0, that allowed them to calculate with large numbers in ways contemporary Greek, Roman, and Hebrew numbering systems didn’t allow.

This latest find “is a window into the intellectual history” of the Maya, he says. Read More

Dr. Van Stone served as Glyph Artist for NightFire Films’ superb 2-hour documentary, “Breaking the Maya Code”. His charge: to recreate as accurately as possible the techniques and style of Ancient Maya Hieroglyphic Writing.
In this preview, we see him carving glyphs into limestone with a Maya-style hardstone chisel, and writing glyphs in a traditional bark-paper codex with a quill pen, using carbon-soot ink dipped from a conch-shell inkwell. (Elsewhere in the film he inscribes a vase, and even writes in Japanese.) He also drew all the glyphs used in the film’s explanatory graphics, seen in virtually every excerpt. 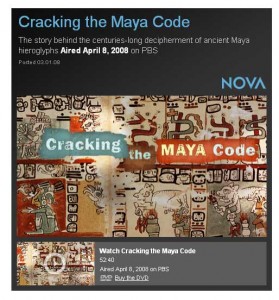 PBS-NOVA broadcast a short version (51 minutes) of LeBrun’s film, called “Cracking the Maya Code”, which you can watch at
http://www.pbs.org/wgbh/nova/ancient/cracking-maya-code.html 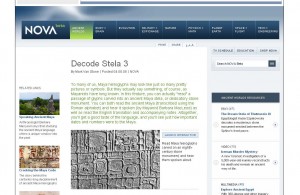 PBS hired Van Stone and his friend, linguist Barbara MacLeod, to work on their associated website. They produced a splendid interactive translation of an ancient Maya inscription from Piedras Negras:
http://www.pbs.org/wgbh/nova/ancient/decode-stela-3.html

This is one of the few places on earth where you can hear authentic Ancient Mayan spoken. 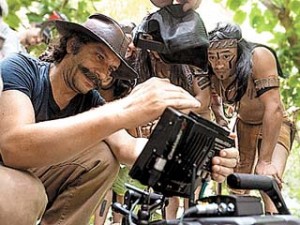 My crude translation: “With a trip to the Maya civilization & the recreation of surprising battles, the English anthropologist Graham Townsley, (together with Discovery Channel, co-produced with Cactus Film), is finishing the (production?) in Mexico of the docudrama “Apocalypsis Maya”, a magical journey to the predictions of this mystical culture which places the end of the world in 2012.”
…
“La grabación <filming>
• Apocalipsis maya contará con 3 capítulos de 50 minutos. <3 chapters, each 50 minutes long>
• La primera parte narrará la historia maya y la referencia con su calendario, <Maya history with reference to their calendar>
la segunda el origen de la fiebre por el fin del mundo en el 2012 <the “fever” for the end of the world in 2012>
y finalmente la caída del Imperio Maya. <the Collapse of the Maya “empire”>

….I am featured in the first of the three episodes.

From Jon and Pamela Voegel, the authors of “The Jaguar Stones Trilogy”, come interviews filmed at Maya at the Playa in September 2010 with 14 archaeologists. Here is one interview with Mark Van Stone, as shown on their website Jaguar Stones. 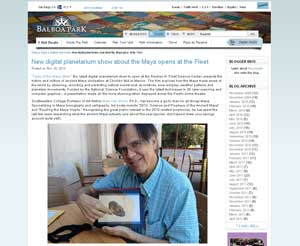 “Tales of the Maya Skies,” the latest digital planetarium show to open at the Reuben H. Fleet Science Center, presents the history and culture of ancient Maya civilization at Chichén Itzá in Mexico. The film explores how the Maya made sense of the world by observing, recording and predicting natural events such as solstices, solar eclipses, weather patterns and planetary movements. Funded by the National Science Foundation, it uses the latest techniques in 3D laser scanning and computer graphics — a presentation made all the more stunning when displayed across the Fleet’s dome theater.  read more 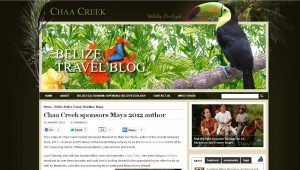 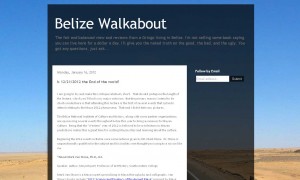 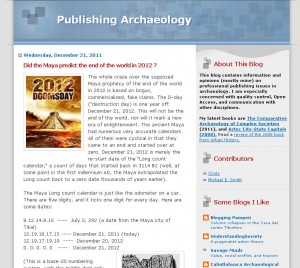 In the blog “Publishing Archeology” by Michael E Smith, author of  The Comparative Archaeology of Complex Societies(2011), and Aztec City-State Capitals (2008)

An overview of Maya long count and some of the reputable books on the subject,  including Van Stone, Mark  (2010)  2012: Science and Prophecy of the Ancient Maya. Tlacaelel Press (private publication, Imperial Valley, CA. 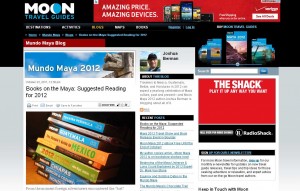 From Joshua Berman, Writer/Editor,  Author of the Mundo Maya Blog on the Moon Travel Guides Website comes a post with his Books on the Maya: Suggested Reading for 2012.
“Van Stone, Mark. 2012: Science and Prophecy of the Ancient Maya (San Diego: Tlacaélel Press, 2010). This book, available directly from the author at (www.markvanstone.com) is also a science-based skeptic’s guide to the subject, written by a respected Mayanist, epigrapher, and professional art historian. This remarkable book is overflowing with color illustrations, glyph descriptions, date breakdowns, and a very thorough investigation of the various 2012 theories. ” 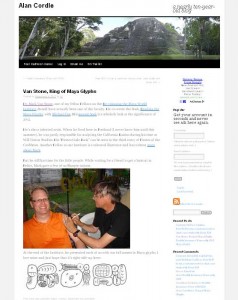 From Alan Cordle‘s blog. Alan was one of my fellow Fellows at the National Endowment for the Humanities Institute about the Maya in Belize summer 2011. 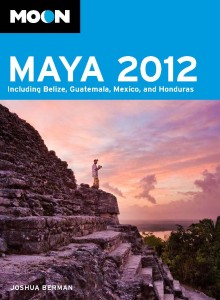 “After the 2011 Maya Meetings in Austin, Texas which addressed the 2012 discussion, Dr. Robert Sitler reported that “the academic community has consistently described the international interest in the year 2012 and Mayan calendrics as a poorly informed product of misguided New Age ideologies with few substantive connections to the Mayan world.” He continues, “Scholars are especially upset with extremist claims that 2012 will mark the end of the Mayan calendar and even the end of the world itself.”

These thoughts are echoed in Mayanist scholar Mark Van Stone’s book, 2012: Science and Prophecy of the Ancient Maya. “There is nothing in the Maya or Aztec or ancient Mesoamerican prophecy,” he writes, “to suggest that they prophesied a sudden or major change of any sort in 2012.” He argues that 13 b’aktuns was nothin’ and points to even longer counts at Palenque, including one indicating that 20 b’aktuns, rather than 13, is the actual length of the Long Count. Another text there has an inscribed date correlating to a.d. 4772, proving, says Van Stone, that the people of Palenque not only expected to survive 13.0.0.0.0 (December 21, 2012), but to worship their kings and gods for thousands of years after that.
“This is about the clearest message they gave us,” Van Stone says, “that they (like us) could not imagine the End of their Culture, they expected it to live forever. Perhaps you could call this a static-cyclical conception of time. I call it normal human self-awareness.”

(about the book) “2012 presents a once-in-a-lifetime travel opportunity. In Guatemala, Mexico, Belize, and Honduras, where most of the world’s ten million Maya reside today, the opportunity for interesting and immersive tourism in 2012 is enormous.

Despite what you’ve heard, there is little evidence of a Maya prophecy connecting 2012 to a foreseen event, whether cataclysmic or transcendent. But the date is significant enough for each country in the Mundo Maya to plan a yearlong uplifting of Maya culture, from the top down (government sponsored celebrations and PR campaigns), and from the bottom up (village homestays, local shamans, grassroots concerts, etc.). Expect special Maya-themed tours, events, ceremonies, symposiums, and celebrations at both minor and major archaeological sites.
This book offers a glimpse of what’s planned and where to go: Watch the summer solstice sunrise from the Canaa pyramid at Caracol in Belize. Decipher the famed Long Count inscription on Stela I at Cobá in Mexico. Celebrate an equinox event in the forest with Maya elders at Uaxactún in Guatemala. Sweat out some toxins in a Maya temazcal, or ritual steam bath near Copán, Honduras. Share a meal of corn tortillas and beans with a Maya family in any of these countries–and ask what they think about the Maya calendar and 2012. “
http://www.chaacreek.com/belize-travel-blog/2012/01/chaa-creek-sponsors-maya-2012-author/